Just months on from  the release of their debut album, Pop Filter – featuring members of beloved indie rock ensembles of yore such as The Ocean Party, The Snowy Band and Cool Sounds – return with their second offering, Donkey Gully Road. Named for the road in Yapeen, Victoria, where the album was recorded.

Pop Filter are a band with a penchant for spontaneity, and on Donkey Gully Road this is brought to the fore. Made up of twelve songs that traverse morconnesque pop, country balladry and straight up Jangle pop. For a band that defines itself by it’s throw away mentality, you would be forgiven for expecting something less considered, but, DGR is a considered album. Songs transition seamlessly from one to the next,  and intricate instrumentation creates a dynamic and cinematic listen. But all the while Fire crackles in the background, and voices murmur. It’s all in there, the four days of friends recording together are captured and throw away ideas are left off the chopping block.

With little interest in the 3 month album cycle, Pop Filter have decided to forgo anything that resembles a singles campaign and instead are encouraging supporters at radio to play whatever takes their fancy ahead of the release date. 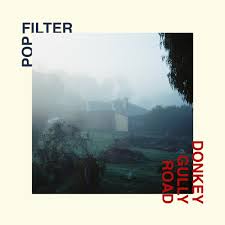