Nature Always Wins arrives as something of an examination, zeroing in on the notion of the self, identity as a band, and that of humanity as a whole. The album’s title nods to the famous Nature vs Nurture debate. Discussing whether change is capable under the influence of time, perspective, environment or if we are destined to be bound by our own genetics, Maximo Park ask, “who are we, who do we want to be, and do we have any control over it?”.

Refining the much-loved UK rockers’ approach as a three-piece, writing began last summer with Smith, Lloyd and English seeking a different kind of fourth member – a producer who was also a musician. Fitting the bill came Atlanta-based Grammy-winning producer Ben Allen (Animal Collective, Deerhunter) who afforded the band freedom to play and create. What wasn’t anticipated was how that freedom would be soon be stripped, as Lockdown restrictions left the band making the most of technological advances to perform real-time recording sessions across the ocean – themselves in Newcastle and Liverpool, with Allen at the helm in Atlanta. 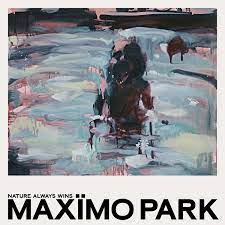