Belly’s review of the album’s US release in Rhythms:

“The great Jonathan Richman released his seventeenth solo album SA digitally and on CD in late-2018, but now courtesy small Ohioan label Blue Arrow Records vinyl lovers can belatedly experience this typically eccentric offering on wax. When Richman first honed his chops in the early-‘70s his band The Modern Lovers featured Jerry Harrison on keyboards – who would go on to fame and presumably fortune with The Talking Heads – who returns here as co-producer as well as playing throughout, while new number ‘The Fading Of An Old World’ is a clear rejoinder to the track ‘Old World’ from The Modern Lovers’ eponymous 1976 debut. That historical link aside SA is most notable for the incorporation of Indian raga (of which SA is the first root note) into Richman’s trademark aesthetic. Yet despite this clear exotic touch – he also sings in Spanish on ‘¡Alegre Soy!’ as he’s sometimes wont to do – it’s the innocent naiveté which runs through everything he touches, even as he grows gracefully old, which as usual is the clarion call on tracks like ‘My Love She Is From Somewhere Else’, ‘A Penchant For The Stagnant’ and  ‘Yes, Take Me Home’. One of rock’n’roll’s true characters continuing to bring the joy.”

Oz pressings contain gorgeous reproductions of killer drawings of Australian wildlife (wombats and so forth) by Jonathan himself! Straight to the pool room! 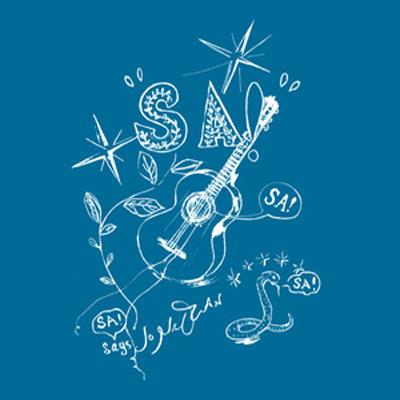