A nod to the stop-start nature of life on the road, the title of the group’s third LP – Hurry Up And Wait – gives a hint of the wild ride Dune Rats have experienced following the success of their breakthrough 2017 record The Kids Will Know It’s Bullshit, which landed four singles in triple J’s Hottest 100 between 2016 and 2017, debuted at #1 on the ARIA charts, was nominated for ‘Best Rock Album’ at the ARIAs and saw the trio performing their explosive live show at sold out headline shows around the world and at home with headline sets at Splendour in the Grass, Falls Festival, Laneway Festival and more.

You would expect a band to get swept up in all the glamour and hype – but not Dune Rats. While Hurry Up And Wait marks a new chapter for the band as their cleanest and most refined release to date, the boys prove just as tongue-in-cheek and down-to-earth as ever.

In the end, the key to unlocking Dune Rats’ third album was bringing everything back to where it all began, returning home after briefly testing the waters in America, swapping Calabasas for the Central Coast and superproducers for old mates. Working alongside producer James Tidswell (Violent Soho), engineer Mitch Kenny, producer/songwriter Miro Mackie and mixer Mike Green, the trio were given the time, trust and space to simply be themselves, making music at their own pace without anyone else trying to shape their much beloved, scuzzed-up stoner sound. The band credit Tidswell in particular, who they say was “an avid believer we shouldn’t go in with a super punk rock sound”, with encouraging them to explore different styles on the LP, pushing them to “really try to make a record that we’re proud of”.

In the process, Dune Rats were allowed to rediscover what made them Dune Rats in the first place, coming out the other end with a much clearer idea of what they do – and don’t – want their music to be. Hurry Up And Wait sees the band evolving while honing what they’ve always done best.

Lead singer Danny Beus explains that the evolution reflects changes in the trio’s personal lives. “We don’t want to be the ‘Scott Green’ band forever. We didn’t set out to make a big album, or a polished album, or an album about partying because the last one did alright, or an album not about partying because we want to get away from that. It’s just writing about different stuff in our lives. It was always just going to be Dunies”. 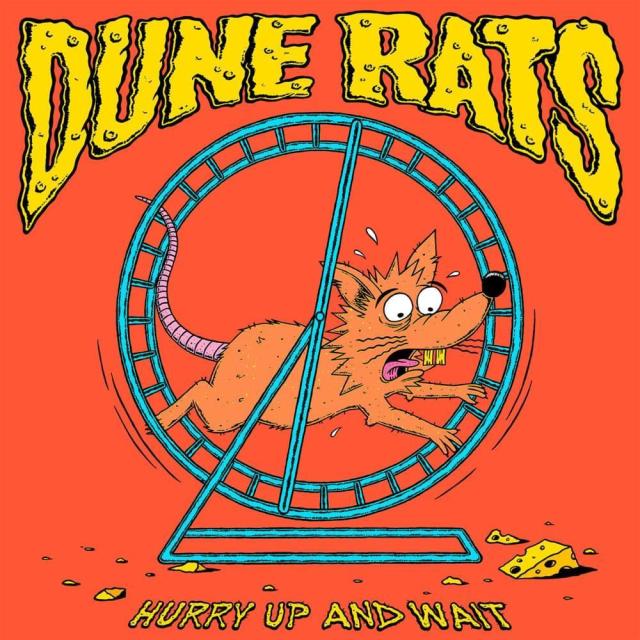