When a close friend took an in-advance listen to Hachiku‘s debut album, I’ll Probably Be Asleep, she had one question for bandleader Anika Ostendorf: “‘why are you so angry?'” It’s not the first reaction that most people would have to the Melbourne-based outfit, whose dream-pop jams —all dewy guitars, rickety drum-machines, and layered ambience, topped off with Ostendorf’s oft-breathy voice— would seem to contain no sharp edges.

‘A Portrait Of The Artist As A Young Woman’ was inspired by a 2AM Gertrude Street nightclub encounter with a climate change denier, and deals with greater ideas of being a young woman in the world, and in the world of music (“it’s about that feeling of trying to express your opinion and not being heard”). ‘Shark Attack’ is a study of loss and grieving, following the death of Ostendorf’s family dog. Songs like the title track, ‘Dreams Of Galapagos’, and ‘You’ll Probably Think This Song Is About You’ are about yearning: for other experiences and other feelings, to be either on foreign shores or back home, but never exactly where you are.

Being restless, unsure of yourself and your place in the world, are classic 20-something themes. And they’re brought into sharp clarity, made tangible and undeniable, on ‘Bridging Visa B’. It’s a song about Ostendorf being left in limbo while her application for Australian residence to be with her partner is being processed. And, in turn, feeling as if the validity of your romantic relationship —not to mention your fate— is in the hands of bureaucratic authorities.

The song opens with the question that Ostendorf —whether interviewing with government authorities or tending bar at the Northcote Social Club— loathes the most: “Where are you from?” She was born in Livonia, Michigan, found her early-childhood years bouncing between America, England, and Germany, before her family settled in sleepy Dansweiler, outside Cologne in Western Germany. She formed her first band, Tutti Frutti, at seven, writing the songs herself. By 14 she was playing in both a pop-punk cover-band and in her mother’s combo of IT workers from the Ford factory, who’d rewrite famous pop songs to be about their workplace.

Ostendorf left for London to study biology, and then, fatefully, spent a year on exchange in Melbourne, with an eye on the city’s famed music scene. Whilst studying, she interned at Milk! Records —the local label made world-famous by Courtney Barnett— from which she took DIY ideals, a strong sense of musical community, and a record deal.

After returning to London to finish a degree she was no longer that interested in finishing —both out of her own stubbornness and at the behest of Milk! boss Jen Cloher— Ostendorf returned to Melbourne. Back in town, she assembled a crack local combo (Georgia Smith, Jessie L. Warren, Simon Reynolds), released the first Hachiku EP, and played countless shows around town; becoming a staple of the music scene she once looked at, longingly, from afar. Hachiku played with Barnett, Cloher, Stella Donnelly, Aldous Harding; supported The Breeders and José González on national tours; and opened for Cloher and Snail Mail on European tours.

I’ll Probably Be Asleep betrays much of that background, that sense of travel and wandering. It was recorded, Ostendorf says, in countless locations, here and there: from houses in Australia and Germany to backyard sheds, rehearsal rooms, and the Milk! warehouse. “It’s like a big puzzle, piecing together these randomly-recorded sounds,” Ostendorf says; offering that she thinks of herself “more as a producer than a songwriter”.

Yet, Ostendorf’s songs are full of memorable melodies, are smartly written and sweetly sung. I’ll Probably Be Asleep is an album of dreamy atmospheres and relatable sentiments, a grand first-up LP for one of Melbourne’s most promise young bands. And, if you listen closely, it’s, in its own way, an angry record. 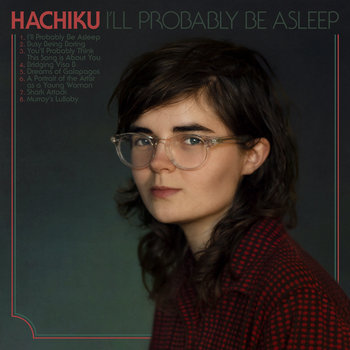