Iconic Australian band Custard makes a welcome return in 2020 with their eighth studio album, Respect All Lifeforms, set for release on Friday May 22nd.  The album is preceded by the irresistible singles ‘Funky Again’ and ‘The Min Min Lights’.

Respect All Lifeforms features 11 new pop gems that sit comfortably alongside Custard classics ’Apartment’, ‘Girls Like That (Don’t go For Guys Like Us)’, and ‘Music Is Crap’.

Custard circa 2020 features the classic lineup of Dave McCormack, Glenn Thompson, Paul Medew and Matthew Strong. Originally formed in Brisbane
in 1990, Custard released a series of classic guitar pop albums over the next decade, including Wisenheimer, We Have the Technology and Loverama.
The band developed a cult following, touring extensively across Australia and abroad, as well as producing a parade of unforgettable singles.

After disbanding at the end of the 1990’s, the band returned in 2015 with new album Come Back All Is Forgiven, which was followed by 2017’s The
Common Touch.

In more recent times, frontman Dave McCormack has found a new legion of fans as the voice of Dad ‘Bandit’ in the smash hit, Emmy and Logie award-
winning ABC Kids series Bluey, which has quickly become the most watched program in iView history, with over 22 million views to date. 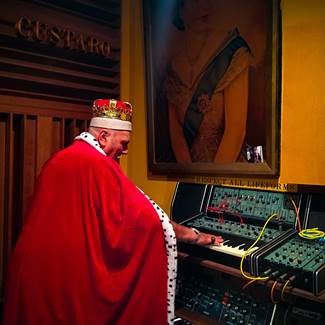